Since the early years of the Rice Institute, when President Lovett personally hired faculty and sat as a full member of the board, the university has developed a more complex system of governance. The most important elements, from the perspective of the faculty, are the university's governing board, its administration, its representative councils, its regular meetings of the faculty senate, and its standing committees. 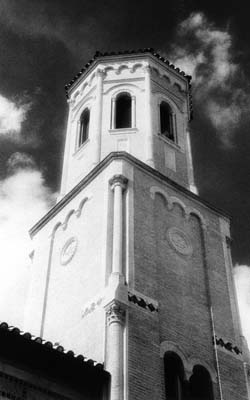 A. The Board of Trustees

Final legal authority for governance of the university rests with the Board of Trustees, yet in practice many academic decisions are delegated to university officials or to the faculty. For many years, the trustees have demonstrated confidence in and support for the president and the faculty in academic matters. Since July 1, 1998, the board may include as many as 25 members, all of whom are trustees with equal voting rights. A simple majority of the trustees must reside in Texas and at least 4 must reside in the greater Houston area. The board elects new trustees to 4-year terms, which may be renewed for up to two consecutive 4-year terms. Each year, one trustee is elected to a 4-year term from the membership of the Association of Rice Alumni. The trustees serve without compensation.

Much of the work of the board is done through standing committees: Academic Affairs, Audit, Building and Grounds, Compensation and Organizational Development, Development and Alumni Relations, Finance, Information Technology, Public Affairs, Rice Management Company, and Trustees. In addition, there is an Executive Committee which exercises most of the powers and duties of the full board between board meetings.

Through the bylaws and by decision of the board, much of the operation of the university has been delegated to the president and through him to others, including the provost and the faculty. The president is appointed by the board, acting on the recommendations of a search committee that, by custom, includes representatives of the faculty, staff, students, and board. All vice presidents, the provost, and a few other officials report directly to the president. Department chairs report to the deans of their academic schools (architecture, engineering, humanities, management, music, natural sciences, social sciences), who in turn report to the provost, the chief officer for academic affairs.

Faculty members normally discuss their appointments, duties, and performance with their department chair (or dean, in the case of some professional schools). Faculty members also have occasion to work directly with other administrative officials, for example, with the Registrar on assignment of rooms, enrollment of students, recording of grades, or scheduling of exams; with the Dean of Undergraduates and the staff under his/her supervision (particularly residential college magisters) on counseling of students; with the Dean of Graduate and Postdoctoral Studies; or with the Vice Provost for Research on applying for research grants.

In spring 2005, the voting faculty of Rice University adopted a new system of faculty governance. In the new system the elected representatives of the faculty, assembled in a Faculty Senate, have extensive authority to make decisions on matters of interest to the faculty. In certain cases, however, the voting faculty may directly put items on the agenda of the Faculty Senate or itself take the final decision in a direct vote. In other words, the new system combines representative governance with considerable leeway for faculty initiative and at times recourse to decision by referendum.

By adopting a Faculty Senate, the Rice faculty did not eliminate all meetings of the voting faculty assembled in plenary session. The Speaker of the Faculty Senate invites the president to make a "State of the University" address to the faculty each year. The Speaker furthermore convenes plenary meetings of the entire faculty the day before commencement and prior to each graduation to receive reports from the Dean of Undergraduates, the Dean of Graduate and Postdoctoral Studies, and the Registrar, and to approve candidates for graduation. In addition, a petition signed by fifty voting members of the faculty requires the Speaker to convene a special meeting of the faculty to discuss a specific matter. If those assembled at such a meeting pass a motion, then that motion will be submitted to the entire faculty for a vote by ballot. The decision of the entire voting faculty takes precedence over the decision of the Faculty Senate, ensuring that the basic principle of self-governance of and by the entire faculty community remains in place.

The Faculty Senate considers a wide range of problems and policies, including all proposals for changes in curriculum and degree requirements. It also serves as the primary advising body to the president on policy decisions and matters affecting the faculty. The Faculty Senate consists of thirty-four members, twenty-six of whom are tenured or tenure-track faculty members elected for a three-year term. The number of representatives elected from each school is based on their proportionate number of tenure-track faculty appointments at Rice as determined by the Faculty Senate every three years. Among the representatives elected at "any rank" from each of the schools, no more than two persons may serve from any single department. Four additional senators are elected by non-tenure-track faculty: three members are to be, and elected by, benefits-eligible faculty holding non-tenured, non-tenure track teaching appointments at the ranks of assistant teaching professor, associate teaching professor, teaching professor, instructor, lecturer at any rank, artist-teacher, associate professor, or professor in the practice, excepting adjunct, visiting, and post-doctoral appointees. No more than one representative may come from one school. One member is to be, and elected by, faculty holding non-tenured and non-tenure-track research appointments at the ranks of assistant research professor, associate research professor, and research professor. The president appoints and the Faculty Senate approves two additional senators, and the president and provost serve as non-voting, ex officio members of the Senate.

For many faculty members, the most frequent opportunity to participate with colleagues in other departments and schools in university-wide affairs is through membership on one of the university standing committees. Faculty members are appointed by the president on recommendation from the Faculty Senate. The Faculty Senate seeks nominations for assignments to particular committees from deans and department chairs. It also polls faculty members directly with respect to their preferred committee assignment. Some committees also include undergraduates, graduate students, and alumni, who are nominated by the associations that represent those groups. While all committees perform a consultative and advisory role, most also have specific ongoing tasks. Not including the Faculty Senate, the university standing committees are:

In addition, the president appoints members to several other important committees without Faculty Senate recommendation. The Office of Sponsored Projects and Research Compliance, for example, recommends faculty for the Biosafety Committee, the Institutional Animal Care and Use Committee, and the Institutional Review Board, while the associate provost chairs and recommends appointments to the Diversity and Inclusion Council (formerly Diversity, Minority Affairs, and GLBT.)

Although the names of most of these committees accurately suggest their responsibilities, a few do not. The Examinations and Standing Committee (Ex&S) is concerned with the implementation of academic rules and policies. Among other duties, it considers and makes recommendations on student petitions for exceptions to the usual rules. The Marshals Committee helps to organize and supervise commencement and other academic celebrations. From time to time, the president and/or provost ask faculty to serve on additional ad hoc committees to conduct a search for an administrative officer or to study and offer advice on a particularly important policy issue.

The Residential College System at Rice dates back to the original vision of President Edgar Odell Lovett. The colleges, modeled loosely on the colleges of Oxford and Cambridge, would stimulate intellectual life by bringing students and faculty together outside the classroom and would promote democratic self-government among the students. President Lovett's dream of a college system was realized in 1957, and that system has flourished over the subsequent six decades, providing Rice with one of its most unique and rewarding attributes. There are eleven colleges: Baker, Brown, Duncan, Hanzsen, Jones, Lovett, Martel, McMurtry, Sid Richardson, Wiess, and Will Rice. Each college has between 225 and 325 resident undergraduates and roughly 70 nonresident undergraduate members. Each new student is randomly assigned to a college prior to matriculation and remains a member of that college for his/her full four years. This makes each college a representative cross-section of the student body to promote academic and intellectual diversity. Each also has its own residence and dining halls, self-government, and distinctive academic, social, athletic, and cultural programs.

As President Lovett intended, members of the faculty play a vital and active role in the college system. At least one member of the faculty and his/her spouse or partner serve as magister of each college, residing with their family in the magister's house adjacent to the college. The college magisters work with students and other faculty members to sustain the college government, advise individual students, and support the intellectual, social, and cultural life of the college. In addition to the magister, there are usually two resident associates, many of whom are faculty. Each college has twenty or more nonresident faculty associates, who work closely with freshman advising groups, provide formal academic counseling for freshmen and sophomores, eat meals frequently in the college, and take part in a variety of college events, from intellectual and cultural programs to theatrical and musical performances or even intramural athletics. Many faculty members find their association with the colleges one of the most satisfying aspects of their job, as a way to meet and interact with students and faculty members outside their academic fields. The university values and rewards faculty service to the colleges. Faculty associates are recruited by the colleges and appointed by the college magisters. Anyone interested in becoming a faculty associate of a college may contact the Office of the Dean of Undergraduates.