To a remarkable extent Rice University was shaped by the intentions of its founders -- William Marsh Rice and the small group of men who came to share his plans for an institution of higher learning. In the spring of 1891, Rice, a native of Massachusetts who had prospered as a merchant in mid-nineteenth century Houston, decided to endow an institute for the advancement of literature, science, and art for the instruction of the white men and women of Houston and Texas. Except for that clear exclusion of students of African descent, Rice was inspired by the examples of Stephen Girard of Philadelphia and Peter Cooper of New York City to create an institute, bearing his name, that would conduct research and provide tuition-free instruction in a nonpartisan and nonsectarian atmosphere. He created a board of seven trustees to oversee the construction and management of his institute after his death. But when in 1900 he was murdered, it took his board of trustees, led by Captain James A. Baker, years to overcome challenges to Rice's will, secure his endowment (initially, 4.6 million dollars), and see that his institute was properly launched. By late 1907, Captain Baker and his fellow trustees had completed a study of other universities and had chosen Edgar Odell Lovett, a classically educated mathematician who was head of astronomy at Princeton University, to be the first president of the William Marsh Rice Institute.

President Lovett, supported by the trustees, gradually refined the character of the new institute. He began by embarking on a nine-month tour of leading universities in Europe and Asia to reflect on higher education and to recruit distinguished scholars for Rice. He returned to plan a university that would not merely provide an excellent education for undergraduates -- an education that included high academic standards, a residential college system, and an honor code -- but also conduct advanced research and train a small number of doctoral students. These were lofty and expensive aspirations. Although the endowment had grown significantly since 1904, Lovett knew that he could not at once have the comprehensive university that he envisioned. He therefore had to emphasize initially only science and engineering. By September 1912, when fifty-nine students assembled for classes on the new campus -- on a flat expanse of prairie just beyond the streets of Houston -- Rice had four buildings and an international faculty of remarkable distinction, a faculty that included Julian Huxley from Oxford in biology, Harold A. Wilson from Cambridge in physics, and Griffith C. Evans of Harvard in mathematics. 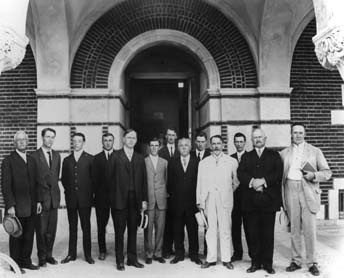 Although Rice grew rapidly for nearly two decades after 1912, a lack of funds during the Depression forced retrenchments and kept Rice a small provincial college that emphasized science and engineering until World War II. Then, new leaders with far greater resources were able to initiate nearly three decades of sustained growth, approaching by 1970 the better-balanced university that President Lovett had envisioned in 1912. Thanks to income from oil fields acquired in 1942 and supported by an ambitious board of trustees, Lovett's successors, William V. Houston and Kenneth S. Pitzer, were able to increase the size of the faculty (from 58 in 1938 to 350 in 1970), recruit many prominent scholars (with higher salaries and, after 1962, tenured appointments), create new academic departments, and construct a variety of buildings not just for classrooms and laboratories but also for the residential college system that began at last in 1957. These changes made it possible for Rice -- Rice University from 1960 -- to admit more students, broaden its curriculum, and put a greater emphasis on research and graduate programs. But to sustain the changes -- to become competitive as a national university -- Rice sought changes in its charter that allowed it from 1966 to charge relatively modest tuition and to admit African-American students (Rice had previously admitted as "white" students of other races and national origins).

Even so, when Norman Hackerman became president in 1970 new programs were stretching Rice's resources to their limit. Hackerman balanced his budgets, reorganized Rice into seven schools (administration, architecture, engineering, humanities, music, natural sciences, and social sciences), and helped increase the endowment from 131 to 680 million dollars by 1985. His successors, George Rupp and Malcolm Gillis, were able to pursue further ambitious plans for enhancing Rice: core courses for undergraduate students, more faculty members to support interdisciplinary research (through institutes and centers), additional graduate programs, and seven new buildings between 1985 and 1997. By the mid-1990s Rice had become a university of more than 4,000 students and 450 full-time faculty members, and its alumni and faculty were distinguishing themselves in a variety of fields (winning, since 1978, Nobel Prizes in physics and chemistry and Pulitzer Prizes in fiction and history). But Rice has remained much as it was conceived by its founders: a relatively small and affordable university pursuing excellence in undergraduate education, in scholarly research, and in a limited number of graduate programs.

Under Rice President David Leebron, the university experienced a 30 percent growth in undergraduate enrollment, increased its international profile, expanded its research enterprise, and deepened its engagement with Houston. The Rice campus was transformed with two new residential colleges, a new physics building, a new recreation center, the BioScience Research Collaborative, and a public art program, among other enhancements. These developments reflect the priorities articulated in the Vision for the Second Century, which emerged from extensive, town-hall style meetings with faculty during President Leebron's first year at Rice.