Rice reviews the performance of its faculty members annually to determine adjustments in salary and periodically to assess professional development and suitability for promotion and tenure. For details see Policy 214: Faculty Performance Reviews. In general, these reviews are based on internal evaluations of research, teaching, and service and involve departmental chairs reporting to deans. In contrast, the reviews associated with promotion to the rank of associate or full professor and the awarding of tenure have an external component. An overview of the policy and procedures associated with those evaluations is given below. 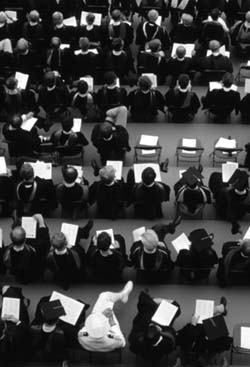 A. Third Year Review of Untenured Assistant Professors and Other Faculty Performance Reviews

Rice reviews the performance of its faculty members annually to determine adjustments in salary and periodically to assess professional development and suitability for promotion and tenure, in accord with Policy 214: Faculty Performance Reviews. The reviews of tenured professors and the yearly, written reviews of untenured professors are generally based on internal evaluations of scholarship, teaching, and service and involve departmental chairs' reports to deans. The third year review of untenured assistant professors during their first four-year appointment under Policy 214, however, is a more detailed process, since the evaluation serves as a partial basis for the departmental recommendation whether a second four-year appointment should be made. See Procedures for Faculty Reappointment, Promotion, and Tenure.

Each non-tenured tenure-track faculty member should receive an in-person and written annual performance review; additionally, faculty on a four-year contract should receive a more-detailed performance evaluation by the department chair between the beginning of the fourth fall/spring semester and the end of the first month of the sixth fall/spring semester of a first four-year contract term.

The department also considers whether to recommend reappointment for a second four-year term later in the sixth semester. The tenured members of the department (or, in schools without departments, a subset of the tenured members designated according to the rules of that school) have the task in the sixth semester of the initial four-year appointment of reviewing the faculty member's performance in all areas, including scholarship, teaching, and service. Dossier preparation is utilized similar to that for the Promotion and Tenure process. The department's report, with a recommendation for contract extension or non-renewal, then proceeds to the dean and provost. Although the evidentiary basis for judgment is less than for a tenure decision due to the shorter period of evaluation, the same general standards and principles apply: namely, the quality and impact of the work to date and whether the faculty member is making reasonable progress toward tenure (Procedures for Faculty Reappointment, Promotion, and Tenure).

Non-tenured assistant professors should note that a higher faculty body, such as the Promotions and Tenure Committee, is not involved with the reappointment process, although in rare instances an external review may also be requested. Tenure-track faculty without tenure-clock extensions whose appointments are not renewed at the end of their initial four-year appointment, however, may submit a grievance to the Faculty Senate Convener of Appeals if they contend that there were procedural errors that adversely affected their case.

Other than annual salary reviews, tenured associate professors receive a review by their chair every three years; a more detailed review is also carried out in their ninth year at associate status. Tenured full professors are reviewed every five years.

B. Evaluation for Promotion and Tenure

For tenure-track faculty, the most important review of their academic career is the review for promotion to the rank of associate professor and the achievement of tenure. The award of tenure is a valuable and unique privilege associated with academic institutions. Tenure offers the individual faculty member a professional career of academic freedom and assured employment, in which to teach and pursue her/his individual scholarly interests with termination only for cause. The award of tenure represents a major commitment on the part of the university and is a concrete demonstration of its confidence that the individual will be a productive and valuable member of the community throughout her/his working life. Thus, the central question being asked at all levels of the tenure review process is "What does performance to date lead us to predict in terms of lifetime achievement and contribution of the candidate to the overall goals of Rice University?"

In considering this question, Rice evaluates each candidate's scholarship, teaching, and service. Rice has a deep commitment to excellence in scholarship and thus places a primary emphasis on scholarly achievements as judged both by unbiased expert external reviewers in the appropriate scholarly field and by Rice faculty members and other external reviewers (e.g., former advisors and supervisors) with similar scholarly interests. Much of the reputation of the university also rests on the outstanding quality of its undergraduate and graduate instruction, and thus Rice gives teaching performance careful consideration. Finally, Rice values service and evaluates each candidate's participation in activities such as departmental and university committees, the residential colleges, community outreach programs, and national professional organizations.

When first appointed, faculty need to familiarize themselves with the tenure review procedures by reading thoroughly Policy 201A: Faculty Appointments, Promotion, and Tenure and the Procedures for Faculty Reappointment, Promotion, and Tenure. Any aspects of the procedures that are not clear should be discussed with the departmental chair and/or others with relevant expertise. Although departmental chairs will occasionally offer very specific criteria for promotion, candidates should be aware that no chair has control over the ultimate decision on any individual candidate.

For most candidates, active engagement in the tenure review process should begin in the spring of their sixth year at Rice, and the major phase of the candidate's involvement in the evaluation process will culminate in the fall semester of the next academic year. The major roles of the candidate are: (a) to prepare certain aspects of the dossier as detailed in the "Procedures," (b) to provide names of external reviewers, former advisors, former supervisors and collaborators who can assess the candidate's scholarly achievements and of Rice faculty members who can evaluate his or her teaching and service, and (c) to suggest the names of members of the Rice faculty and, if necessary, other individuals who might best serve as internal reviewer to evaluate the candidate's dossier for the department, dean, and the Promotion and Tenure (P&T) Committee. Any conflicts of interest in these categories should be noted, and the candidate can provide names for two external reviewers who should be excluded. A candidate should also consult closely with the departmental chair on what materials are appropriate for inclusion in the dossier. Clearly, it is in the candidate's best interest to ensure that as much of his/her scholarly work as possible has been published by the end of the sixth year. The candidate must not contact any of the proposed reviewers in connection with their willingness to participate in the review.

After this evaluation at the departmental level, the dossier is forwarded to the school dean for further review. The dean's task is to evaluate the candidate in the context of the entire cadre of faculty members within the school. The dean may convene an advisory review panel or draw on the expertise of other faculty in the school where appropriate.

This stage of the review process will typically begin early in the spring semester of the candidate's seventh year, that is, many months after the candidate initially assembled the dossier. Given that there can be substantial changes in a candidate's circumstances within this time (a critical paper accepted, a grant awarded, and so on), a candidate may submit important new information, through the departmental chair, both to the dean and to the P&T Committee, after the initial departmental vote. However, the P&T Committee is usually unwilling to accept further information once their deliberations have begun.

The members of the P&T Committee have the weighty task of deciding the future careers of their junior colleagues. They undertake this task with due seriousness and carefully review each dossier. After the P&T Committee has voted on each candidate, recommendations of the committee and the provost (these can be combined or separate as indicated in the "Procedures") are provided to the president for a final decision. Traditionally, the members of the P&T Committee do not simply vote "yes" or "no" but rather use a graded scoring system. The committee sends its entire scoring for a given candidate, complete with the average score and the range, along with a detailed summary of the discussion, to the president. This procedure ensures that the president receives a finely nuanced summary of the committee's view of each candidate.

The president reviews the decisions before sharing them informally with the candidates and presenting recommendations to the Board of Trustees for final approval.

Policy 201A; Faculty Appointments, Promotions, and Tenure allows candidates to appeal a negative decision to the Appeals and Grievances Committee of the Faculty Senate. It is important for candidates to realize that a decision can be appealed only on procedural grounds. That is, the candidate must demonstrate that correct procedure for presenting her/his case was not followed and further, that procedural error affected the evaluation in some substantive way. Without demonstrating this kind of error, a candidate cannot formally challenge the P&T Committee's assessment of the candidate's performance. More information on the appeals procedure may be found in Section 5.5 of the Faculty Senate Bylaws and in the Faculty Senate Rules for Appeals and Grievances.